This was what I made my Mum for Mother's Day this year (yeah, yeah, it was ages ago!). March and April are always busy times in our family in terms of sweet treats - we've got Easter to contend with, but also Mother's Day, my Mum's birthday and my birthday in quick succession, so it can feel like a bit of a chocolate and cake eating marathon at times (and what's wrong with that you may well ask!).

So this year I thought I'd skip the cake for Mother's Day - sweet treats were still the order of the day (of course!) but I wanted to make some things that could be picked at and might keep a bit longer. Plus I had this set of three boxes that I thought would be perfect to put them in, which were part of a gift set I'd had myself a few years back.

The boxes dictated the size of the things I had to make, so I spent a few weeks mulling over some of my Mum's favourite flavours and things and decided upon:

I think these are my Mum's ultimate favourite biscuit, she has told me in the past that when in work meetings nobody touches the jammy dodgers as they know they are her favourite! I based the biscuits on this recipe for Cherry Shortbread Hearts (which I'd made a while back for Valentine's Day for Mike), omitting the chopped cherries and using a round cutter for the biscuits. I cut out the middle of half of the batch before baking with a small heart cutter. I then sandwiched the cooled biscuits together with strawberry jam. I was a bit gutted to see this recipe for Jammy Dodgers on the Caked Crusader's blog just a few weeks later - I would definitely try that recipe instead next time!

Following the exact same recipe as the Malteser Fudge test batch, instead I topped the fudge with some dark chocolate chunks to try and counter the excess sweetness - plus my Mum loves her dark chocolate. Again the fudge turned out great, I was a little worried that the first batch had been a fluke, but it's definitely a winning recipe, and although I love my Maltesers I think a dark chocolate topping is the way forward with these, if you want to keep some of your teeth...

I'm not entirely sure whether these are a big favourite of Mum's, I know After Eights were often consumed in our household growing up but to be honest the main reason I made these was because they were tiny and would fit in the tiny top box, and would keep a bit! This was a recipe I made way back when during Christmas 2010 and I'm not sure why I hadn't re-made it yet. Such a simple and easy recipe, that will be featuring again this Christmas I think.

The treats were wrapped in individual bags and tied with matching ribbon and I got some tissue to line the boxes with. They were then stacked up and all tied together with ribbon. I was really pleased with the overall effect and I think (hope!) they made a lovely homemade gift to make a nice change from cake.

As all three of these are petite treats, I'm sending them to this month's Treat Petite challenge, hosted by Kat of The Baking Explorer and Stuart of Cakey Boi, with Stuart being this month's host and the theme being 'Anything Goes.' 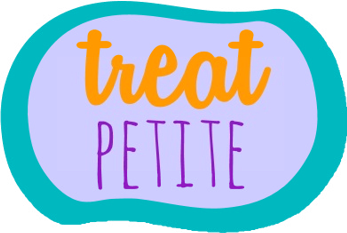